Ideological Blinders Prevent An Obama Pivot On The Economy

President Barack Obama and Japan’s Shizo Abe both face sluggish economies that have been stimulated to the limit with few, if any, positive results. To his credit, Abe recognizes the need for the politically tough “structural reforms” of credit, agriculture, and retail sales to restore Japanese growth. Obama ignores the deep structural problems of the U.S. economy – over regulation, the uncertainties of Obama Care, anti-growth tax policy, and growing entitlement incentives not to work. Instead, he offers minor sops masquerading as reform, and blames his five-years-out-of-office predecessor for what is wrong today. Under Abe, Japan, at last, has a chance of revitalization. Under Obama, the U.S. will see more of the same. He cannot attack the structural problems restraining the U.S. recovery because they are largely of his own making. The pitiful recovery was authored in Washington.

In yesterday’s hour and four minute speech, President Obama reprised his many “pivot to the economy” speeches of the past: He inherited a mess from Bush, but he got America moving again. He has been blocked by a recalcitrant opposition determined to see him fail.  Without his bold actions, we would still be mired in a painful recession. The President paraded a wish list of shopworn mini-fixes – youth training, mortgage relief, more infrastructure investment — and “mother and apple pie” calls to bring American jobs and manufacturing back home. He failed to offer any concrete proposals how to create jobs and accelerate tepid growth.

Posted by Paul Gregory at 11:47 AM No comments:

Images of Navalny and Putin

Some Facts on Food Stamps You’ll Not See Elsewhere

The liberal blogosphere condemns any cut in food stamps on the grounds that poor hungry people, especially children, are hurt and that food stamps have become an essential (and apparently permanent) stimulus to keep our economy moving.

The accompanying chart (taken directly from the Congressional Budget Office) provides some perspective on where we stand:

The chart shows that, in past years, the number of recipients and spending on food stamps move with the business cycle, as measured by the unemployment rate. However, starting in 2001, food stamp spending and participation rose despite low unemployment due to the use of EBT credit cards and enhanced enrollment efforts. (Thank you, George W. Bush?) Both enrollment and spending soared with the recession of 2008, but did not moderate with the recovery that began in late 2009/early 2010. Both food stamp spending and participation doubled between 2007 and the present!

Those who oppose any cuts in the food stamps program argue that food stamp spending and participation were driven up by the recession and we still need an extra boost. If so, they should accept the fact that food stamps should decline as the recovery continues. The chart shows that the CBO expects food stamp spending to drop by $11 billion over the next decade, and the number of recipients to fall by 13 million people (under current legislation) as a consequence of the economic recovery.

Using CBO projections, Congress should prepare for reductions in the food stamp program. Using the CBO figures, Congress should budget slightly over $1 billion less per year over the next decade even without any changes in food stamp rules. Although opponents of food stamp cuts warn that some 2 million people will lose coverage as a result of the proposed House bill, the CBO projects that a much larger 13 million will lose coverage as the recovery proceeds without any changes in the way food stamps are administered. 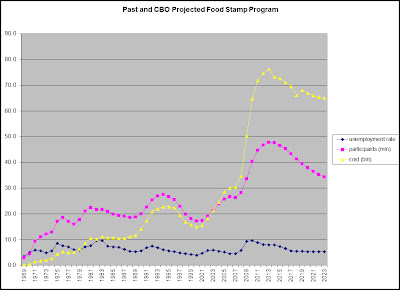 Those who oppose any reduction in the number of beneficiaries and benefits paid have lost sight of the meaning of entitlements, just as those who argue for permanent stimulus have forgotten the basics of Keynesian economics. Instead of accepting the reductions that are supposed to accompany a recovery, they are making new arguments. One is that food stamps really do not fight hunger. Rather food stamps fight obesity, especially among children. (I do not know how food stamps affect recipients’ choice of food. Please enlighten me). Obesity is a growing problem, so we need more food stamps. Second, they argue that we need food stamps as a disguised form of stimulus, without which the recovery is jeopardized.

I guess obesity and deficient stimulus will always be with us. Therefore let’s have no cuts in food stamps.

In googling material for this piece, I found that the first 40 posts argued against any food stamps cuts of any kind and warned of horrendous consequences of cuts. I ran across a vast array of groups and lobbyists with vested interests in food stamps. I did not find one article supporting the food stamps cuts that must come according to the CBO. The one exception was an attack on Lou Dobbs for venturing to say food stamps need to be cut.

We have no lobby for cutting government spending. Let’s hope the Tea Party gets animated again. This is a good issue for them.
Posted by Paul Gregory at 9:41 AM No comments:

Putin Declares Himself Dictator With The Navalny Verdict

Alexei Navalny’s five-year prison sentence on fabricated charges removes Vladimir Putin’s last political opponent from the scene. Navalny was charged with stealing a small amount of money during the course of giving pro-bono legal advice to a regional government on the sale of timber.

Navalny, the charismatic anti-corruption blogger and activist, was one of the key organizers of anti-Putin demonstrations following the disputed parliamentary and presidential elections of December 2011 and March 2012. He had been a thorn in the side of the Putin machine by exposing its high-level corruption on his blog, which is followed by millions of Russians. He was indicted by Putin’s Investigative Committee – an extrajudicial body that works like the troikas of the Stalin era. Among those exposed by Navalny for the theft of billions were the very members of the Investigative Committee that indicted him. Navalny coined the term widely applied by the Russian people to Putin’s United Russia, as the “party of thieves and scoundrels.”

go to forbes.com
Posted by Paul Gregory at 7:58 AM No comments:

China avoided the world recession that started in 2009. The wise communist party, we are told, ramped up infrastructure spending – unimpeded by the need for licenses, court reviews, or rights of way. The government pumped in just enough infrastructure spending to maintain China’s healthy growth rate.
Skeptics of democracy and free enterprise waxed eloquent about China’s state capitalism, as directed by China’s communist party. We want more of what China is having over here – was the refrain.

Democracy and free markets indeed make mistakes. No one promised free sailing of steady growth, low unemployment, and the absence of business cycles. Bubbles and busts have been a part of the capitalist system since the Dutch Tulip Bubble of 1637. We can debate the role of government in the U. S. housing bubble and in Europe’s banking and Euro crises, but no proponent of market capitalism has promised a bubble-free, recession-free world.

The proponents of state capitalism and a one party system do make such promises. The Soviet Union promised that “scientific planning” would lead to steady growth, innovation, and the eventual overtaking of the United States. China’s communist leaders laud their “socialism with a Chinese face” in which sober and wise party and state officials can be counted upon to make the correct decisions.

History tells another story.  The most disastrous blunders have been committed by the scientific planners of one party states. Miscalculations and errors of the market system tend to be self-correcting if they are left alone. Even when they are mishandled, the damage is minor compared to the blunders of the state capitalists.

In an opinion piece disguised as news, the New York Times (I.R.S. Scrutiny Went Beyond the Political) reports that many applicants for tax-exempt status were singled out for scrutiny, not just political groups.  Groups like “Break the Bonds,” “Cash for Musicians,” and advocates of medical marijuana and open source software were selected for extra scrutiny under the IRS’s  “be on the lookout” program. They were subjected to long waits, intrusive inquiries and bureaucratic hassles that appear unrelated to politics. It was not just the Tea Party that suffered such indignities. Rather, the problem is not the politicization of the IRS but a “process that became too rigid and too broad.”

Big whoopee: The Times is telling its readers that the IRS might actually be doing its real job of preventing shady money-making organizations from disguising themselves as charities. So, the IRS does something other than harass conservative organizations. Let’s hope so.

go to forbes.com
Posted by Paul Gregory at 11:15 AM No comments:

Egypt's Rocky Road Into The Unknown

The Egyptian military’s ouster of President Morsi of the Muslim Brotherhood is, to play with Lenin’s famous expression, one step back (away from democracy) in order later to take two steps forward (for democracy).


The Muslim Brotherhood electoral victories that brought Morsi to power with a parliamentary majority show ability of a disciplined minority to gain power over an undisciplined majority. The Bolsheviks gained power in October of 1917 through their greater discipline (and their willingness to use force) despite garnering only a quarter of the votes for the constituent assembly at the peak of their power and popularity. It is noteworthy that Morsi ran on an electoral platform that promised a secular Egyptian state. It was this electoral promise that he was backing off when he was ousted.

go to forbes.com
Posted by Paul Gregory at 1:41 PM 1 comment: