Oleg Arkhipenkov, accused of  “disorders” at Bolotnyaya Square, was placed in an undesignated psychiatric hospital, where he was administered unknown psychiatric drugs. His lawyer, Igor Popovsky, declared in an interview: “I could not find Arkhipenkov for six days from 19 to 26 of June. Finally, his investigator said that he had voluntarily agreed to psychiatric assistance and was placed in a hospital which he refused to name. When I found him in the Butyrski Investigative Isolator, Arkhipenkov appeared sluggish and said that they had administered some kind of psychiatric drug to him in some kind of psychiatric clinic. He said that he was in no condition to answer questions.”

The 27-year-old director of a travel agency was one of the eleven arrested for the disorders in May.

Butyrskaya Prison on the outskirts of Moscow was the prison in which Stalin interrogated and condemned the most prominent victims of his purges.

Supremes call Obama Care what it is: a tax, after Obama lawyers admit the same.
Posted by Paul Gregory at 8:40 AM 5 comments:

Maria Baronova appears to be the only activist accused under Article 212 part 3 (calls to mass disorders). She received an unexpected visit from ladies from the “organs of control.” The ladies from the “organs,” made remarks about her anti-social character and about anonymous complaints from her neighbors. Hints were made that it was possible that her child might need to be placed in a state institution. It is clear that this action was designed to pressure and frighten a visible civil activist and to underscore that an arrest could be imminent.

Taking away children of regime opponents and placing them in state orphanages, by the way, was widely practiced under Stalin.

In 2001, the Environmental Protection Agency ordered a 95 percent reduction in emissions of nitrous oxide for heavy-duty diesel engines to take effect in 2010. According to the EPA’s in-house cost-benefit analysis, this reduction would prevent, among other things, 8,300 premature deaths, 23,100 cases of chronic bronchitis, 360,000 asthma attacks, and 386,000 cases of respiratory symptoms in asthmatic children every year.  Over ten years, almost 100 thousand people would be around who would otherwise be underground! EPA cost-benefiters monetized annual benefits of its regulation at $66.2 billion versus a paltry annual cost of $4.2 billion. What a marvel! We can save all these lives and prevent all these illnesses at virtually no cost to anyone.

Come 2010, Navistar, the third largest seller of heavy duty trucks and employer of 4,000 manufacturing workers failed to meet the EPA’s nitrous-oxide standards. Its competitors, largely foreign owned, complied. They are no longer killing people and making children sick, like Navistar.  Instead of shutting Navistar heavy-duty truck division down until it meets its nitrous oxide standards, the EPA substituted a fine ($1919 per vehicle) in January of this year, which allowed Navistar to continue to produce and sell non-compliant trucks.

Using the EPA’s own figures, I calculate that Navistar’s “non-compliance penalty” will cause 2,075 premature deaths, 5,772 cases of chronic bronchitis, and  90,000 asthma attacks in 2012 alone – a small price to pay for 1,200 manufacturing jobs in an election year.  (My calculations use Navistar’s share of the heavy truck market and the fact that heavy-duty trucks account for about a third of its business). 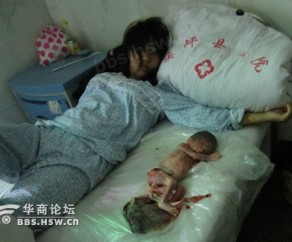 http://www.ministryoftofu.com/2012/06/gruesome-photos-of-forced-late-term-abortion-appall-china-challenge-one-child-policy/
Posted by Paul Gregory at 10:57 AM 9 comments:

The Greek Vote, Blame Germany, and the Forgotten Reforms

Greek, French and Egyptian voters went to the polls today. In what was supposed to be a turning point for Egyptian democracy, voters turned out in small numbers to cast their ballots for the Muslim or establishment candidate. They well understood the military had assumed control and the election was meaningless. In Europe, Greek voters remained evenly divided between the center-right and the Left, which promised to jettison the austerity of the Euro bailout agreement. Although preliminary results suggest that a pro-Euro coalition may achieve a fragile majority, it is sure that Greece will continue to muddle along from crisis to crisis. Europe needed clarity but got more confusion. The Greeks did not vote to leave the Euro, and no one wants to be responsible for pushing them out. Greek voters reckon that Europe will bail them out unconditionally rather than risk Greece’s departure from the Euro. Quite a gamble, but it may be a winning bet.

In France, electors gave their new socialist president Hollande a solid parliamentary majority to support his pro-stimulus and pro-welfare state policies. With two elections out of the way, attention turns tomorrow to Mexico where the G-20 leaders can pontificate and agree on general principles while deciding nothing.
Sunday’s votes took place against the drumbeat of blaming Germany for all that ails the Euro zone. If only the miserly, self-centered Germans would lend a helping hand to their deserving neighbors, all these troubles would go away. The blame-Germany narrative gives the weak European countries an excuse for not taking tough action, and the facts show that Germany’s stingy reputation is undeserved.

Dr. Gregory's latest book can be found at Amazon.com.
Posted by Paul Gregory at 1:53 PM 1 comment:

So Much for Egypt's Arab Spring

The Arab Spring has ended in Egypt as I expected. The Military has abolished the parliament and has introduced new rules close to martial law. It seems to make no sense to continue with the presidential election runoff.

What has happened was totally predictable. The Egyptian military (and associated establishment) control some 40 percent of the economy. They are rich and will not give up what they have without a battle to the death. A legitimate, independent government would have taken all this away.

The U.S, State Department must decide what to do. We might be tempted to go back to the status quo alliance with an unsavory partner. Who knows?
Posted by Paul Gregory at 8:24 AM 3 comments:

Now we have another category: People who take early social security (and sacrifice higher pensions from later retirement) due to the fact that they cannot find jobs.

According to an analysis by Steve Goss, chief actuary for the Social Security Administration, about 200,000 more people filed initial claims in 2009 and 2010 than the agency had predicted before the recession, and he said the trend most likely continued in 2011 and 2012, though that is harder to quantify. The most likely reason is joblessness. If we assume that as many people were forced into early retirement by unemployment in 2011 and 2012, the total number of “forced” early retirements would be 400,000.

If these forced retirements were added to the unemployment rate, it would rise by two tenths of one percent; namely, from 8.2 to 8.4 percent.
Posted by Paul Gregory at 3:30 PM 2 comments:

American exceptionalism is the notion that the United States occupies a unique position in the world, offering opportunity and hope to others by its unique balance of public and private interests and constitutional ideals of personal and economic freedom. The phrase, often attributed to Alexis de Tocqueville in his 1835 Democracy in America,  offers Romney an opening wide enough for a truck: If America is exceptional, why must we fundamentally transform it as Obama promises? Instead, we need a steady-hand Mitt to restore America’s greatness.

to read the rest
Posted by Paul Gregory at 7:04 AM 2 comments:


Epidemics provide fodder for the news media, especially on slow news days. They give politicians a good cause to promote and villains to blame.  We move from one fad epidemic to the next, abandoning old ones to the dustbin of history.  Fear of epidemics that never were can be costly, such as the mad cow epidemic, whose incidence proved no more than the normal background disease level. There are still enough tuna to grace our tables, and the polar bear population seems to be doing just fine.

Obesity is the new fad epidemic. It gives the First Lady a cause to divert attention from the economy, and the Mayor of New York can gain accolades by banning Big Gulps and other offending beverages. Super-thin anchor women can condescendingly narrate stock footage of the same obese woman walking her toy terrier, her beltline jiggling. What is America coming to? American women have let themselves go.

The January 2012 release of the  Prevalence of Obesity in the United States by the Center for Disease Control confirmed suspicions of an obesity epidemic. A closer reading of the report, however, provides a more nuanced picture. The CDC statistics show that from 1999-2000 to the present, obesity rates among women and girls have not increased.  The obesity rates of men have risen. In 1999 men were less obese than women. Now men have caught up. In 1999 boys and girls had the same obesity rates. Now boys are higher.

The die is already cast. Obama bet all his money on Keynesian stimulus propped up by super-expansionary monetary policy, the Detroit bailout, and extensions of unemployment insurance. He has nothing left other than infrastructure projects, subsidies for state teachers and first responders, and a feeble jobs credit for small business. The one move that could turn things around quickly — extension of the Bush tax cuts – would deprive Obama of his prime campaign message that “the rich must pay their fair share.”

In a piece dated August 28, 2011 Why Obama Cannot Support a Real Jobs Program, I laid out an anti-Keynesian jobs program to create jobs and lower the unemployment rate. The third point in my program read “to create economic conditions that encourage businesses to hire and the unemployed to seek and accept jobs.” To do this, I advised not to extend unemployment benefits and to reduce the minimum wage, particularly for youths. The President did not follow my advice and look where he is now.
I wish to throw the social security disability into the mix of anti-job programs. The disability program is not the creation of the Obama administration, but Obama appointees have set and interpreted its policies for more than three years. Let’s examine their record:

got to forbes.com to continue reading this article

Dr. Gregory's latest book can be found at Amazon.com.
Posted by Paul Gregory at 12:22 PM 5 comments: