The German and world press universally laud Angela Merkel’s election triumph in the German parliamentary elections. She has won (not 100% sure) a third term and she fell only three seats short of the holy grail of German politics – the absolute majority. Pundits say she won because German voters like her slow but steady decision making and her down-to-earth style. Few have pointed out that her election victory has been marred by a huge electoral blunder.

Throughout history, politicians have fabricated crises to justify their own solution to the crisis they themselves dreamed up. History is strewn with non-existent crises – the population bomb, global cooling, resource depletion,  freon destroying the ozone layer, and so on  – that threaten destruction unless the government acts. The U.S. “hunger crisis” is the latest in a long line of such relics.

The current hysteria over the House bill to cut food stamps by $40 billion over a decade  (see Krugman, Free to Be Hungry) will be framed against America’s “hunger crisis” fabricated by the powerful “hunger lobby.”  Democrats will use the “hunger crisis” as a cudgel to beat those who favor cuts in food stamps into bloody submission. How can any decent person favor cutting aid to hungry families, who, according to the crisis mongers, constitute one out of six of our neighbors? Few politicians have the fortitude to withstand the onslaught and the “crisisists” will likely win. A non-crisis will be “solved,” as real facts and real crises are ignored.

Facts are the enemy of the “crisisists.”  Therefore, we hear few of them, and the facts we hear are distorted beyond recognition. In this case, the facts speak for themselves: The United States, and increasingly the affluent world, has a crisis not of hunger but of obesity. The hunger crisis is a clever fabrication to serve political and commercial interests. If the hunger lobby’s facts are true, our hunger rates equal those of the poorest African and Asian countries.

A quick review of the real facts:
Fact 1: More than one of three Americans is obese.
On the other hand:
Fact 2: One in a thousand adults and one in ten thousand children do not eat for a whole day on an average day.

Fact 3: Almost a third of a million Americans die annually of obesity. Obesity is the second leading cause of preventable deaths.
On the other hand:
Fact 4: Deaths from hunger (due primarily to eating disorders) are too rare to be recorded in mortality statistics.

go to forbes.com
Posted by Paul Gregory at 10:13 AM No comments:

Why Putin Cannot Afford Runoffs: Navalny and the Moscow Election

As Vladimir Putin was running circles around Barack Obama,  opposition mayoral candidate Navalny was giving Putin’s Kremlin a lessen in American retail politics. Putin won big on Syria but lost big in the Moscow mayor’s race, whose outcome may change Russian politics in the long run.

In the September 8 Moscow mayoral election, incumbent, Sergei Sobyanian, narrowly avoided a run off with 51.2 percent of the votes. Challenger, lawyer, anti-corruption blogger Alexei Navalny, officially received 17.2 percent. The Moscow Electoral Commission subsequently declared Sobyanian the victor. Navalny continues to challenge the vote in the courts with truckloads of evidence of voter fraud. Navalny has a snowball’s chance in hell of reversing the outcome in Russia’s courts.

go to forbes.com
Posted by Paul Gregory at 3:13 PM 2 comments:

In my Robert Reich’s F Minus In Economics: False Facts, False Theories, I gave Professor Reich an F for his Higher wages can save America’s economy — and its democracy. For those who missed it, the reasons for my grade (as a 40-year teacher of economics) are Reich’s lamentable disregard for facts and his lack of knowledge of basic economics. My specific criticisms included:

First, Reich’s assertion that America’s growth and prosperity rest on a “basic bargain” that corporations pay their workers enough so that they can buy their products is wrong.  Reich claims the bargain was pioneered by Henry Ford in 1914, who decided to pay his workers enough to buy his Model T’s.
Second, historical statistics show Reich’s assertion that the Great Depression was caused by businesses allowing wages to stagnate and profits to soar in the 1920s is false.

go to forbes.com
Posted by Paul Gregory at 8:50 PM 2 comments:

I am appalled by the economic illiteracy encountered in leading newspapers, business magazines, and prominent web sites (the news section of the Wall Street Journal is no exception). Robert Reich’s Higher Wages Can Save America’s Economy – and Its Democracy (Salon.com) is only one of many examples. As a teacher of economics for over forty years and a co-author of a best-selling 1980s economics 101 textbook, I would have given Reich’s paper a resounding F, if he had submitted it for my elementary economics class.

Reich’s elevated credentials point to an automatic A+.  As a frequent TV pundit, author of 13 books, Chancellor’s Professor of Public Policy at the University of California at Berkeley no less, and self-identified as “one of the nation’s leading experts on work and the economy,” many readers will automatically believe his economic nonsense. As a former Secretary of Labor, readers would be surprised to learn that Reich does not appear to understand how wages and labor markets work.


Reich’s resume raises one red flag: He is not an economist but a lawyer – a Yale Law School classmate of Hillary Clinton, who studied a smattering of economics for his PPE (politics, philosophy, and economics) degree at Oxford – a Rhodes Scholar no less. I am no formal credentials snob. Non PhD economists, such as Robert Samuelson, write very good economics. Robert Reich is not one of them. 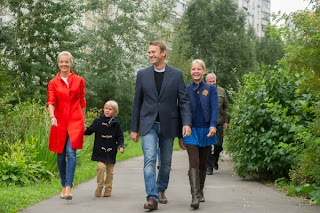 go to forbes.com
Posted by Paul Gregory at 2:29 PM 1 comment: