The judge's verdict in the Pussy Riot case is expected to fall this Friday with prison sentences for the three defendants, accused of  "religious hatred."

The lawyers for the young women are seeking to prevent the seizure of the two young children of band members by state authorities and their transfer to foster homes designated by the state. The picture shows the courageous lawyers (who themselves face potential sanctions) with one of the children. 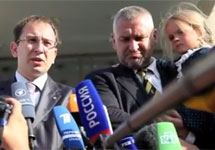 Putin is following Stalin's example. During his purges, the children of "enemies of the people" were placed in orphanages run by the secret police. They were guaranteed a life of indoctrination and deprivation. The practice of seizing children served as a deterrent for Stalin. It is not beneath Putin to rediscover this Stalinist tactic in  his campaign against dissidents.
Posted by Paul Gregory at 2:22 PM