According to the Putin News Network, dangerous enemies of the people maimed and wounded burly and heavily armored OMON security forces during the May 6, 2012 demonstrations in Moscow. Their weapon of choice: rocks and pieces of asphalt.

Among the most ferocious of the “inciters of mass disorder” was one 18-year-old Alexandra Dukhanina, captured by TV crews throwing an undesignated object, presumably in the direction of the OMON security forces. Russia’s NTV shows Alexandra being  hauled to a paddy wagon by  a security officer, lifting her off the ground with a strangle-hold around her neck. 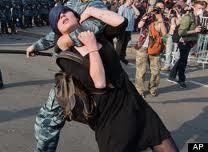 Alexandra is next shown in the accompanying photo in a prison cell in handcuffs.

Clearly that is where such enemies of public order belong. NTV camera crews show a bleeding OMON officer leaving the scene of the demonstration to join a number of his wounded colleagues lounging in hospital beds, bored with no apparent injuries. At least they bravely defended society against those who threaten the “stability” that President Putin has promised.

Next NTV shows Alexandra’s friends being interviewed. They say, to their regret, that she used to be a normal girl until she fell under the influence of the cult of demonstrators.

Alexandra has been released to Chinese-like house arrest. She is not allowed to telephone or use her computer. If convicted she can serve seven years in jail. Light punishment for an inciter of mass disorder.

For those who wish to see Alexandra and her vile deeds, click here.

Note Putin’s strategy: Arrest, manhandle, and threaten with prison ordinary participants in demonstrations, not the leaders. Putin wants to raise the cost to individual protestors to keep the demonstrations small.
Posted by Paul Gregory at 7:57 PM