Sting, Flea, and Franz Ferdinand Against Putin: Who Will Win?

Rockers of the world are uniting against Putin’s arrest and incarceration of  the Pussy Riot punk rock group.

“Flea” promises the band members – Nadya, Katya and Masha – “his finest energy” and prayers for their release. He will “try to make as many people aware as I can.” Anthony Kiedes writes: “We love you, support you and are here to help you.” Alex Kapranos sends his support and complains that “Any leader of a country who claims to be a fan of the Beatles and Elton John and then imprisons contemporary musicians who are expressing their personal political views are dangerous hypocrites.” He seems to have gotten that right. Apparently Sting has lent his name to the protesters.

Pussy Riot’s crime was to play what they called a punk prayer, "Mother of God, Cast Putin Out!" inside Moscow's Christ the Saviour Cathedral in February. Nadya, Katya and Masha have been in jail since early March. Their trial is scheduled for the end of July and they face jail sentence of up to seven years.

Putin has enlisted his ally Patriarch Kirill, the head of the Orthodox Church to condemn Pussy Riot as the devil. 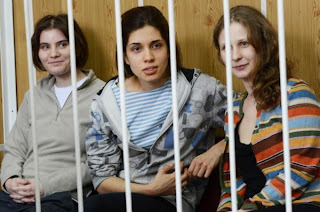