We have reason to believe that the self-appointed leaders of the self-proclaimed Peoples Republic of Donetsk (PRD) understood quite well the message of the May 11 referendum. Less than 12 hours after the polls closed, the PRD military commander, Colonel Strelkov alias Strelok (real name Girkin), purportedly issued alarmed instructions to a restive, unsupportive east , beset by lawlessness and chaos, from which the Russian “volunteers” might have to flee.

The purported order came into the hands of MediaUkraine. A copy is attached. We do not know if it is authentic, but the words and message are consistent with past pronouncements by Strelkov.

The order purported from Strelkov (as translated by me despite its rather bad grammar and twisted syntax) reads as follows:

The events from 09.05 to 11.05.2014 and the results of the referendum conducted on the territory of the and Lugansk oblasts reflect only the partial achievement of established goals. The work is made more complex by a series of issues, based on the fact of cases of uncontrolled marauding in and Lugansk oblasts, the unauthorized use of firearms, military supplies, and materials, the low level of support for actions for the self defense of the local population.

Based on the above, I ORDER:

1. The distribution of weapons, military equipment, financial resources, narcotics, and alcohol [my itals] will be handled exclusively by the forces of self defense (without the participation even of loyal local activists).

2. Actions aimed at the destabilization of the situation must be clearly coordinated with the staff.  Eliminate acts of uncontrolled looting and marauding.

3. Actions of intimidation (torture, demonstrative punishment of Ukrainian activists including those armed) can be carried out only with the agreement of representatives of Russian mass media [my itals]

4. Increase the intensity of  actions to discredit Ukrainian authority and attribute responsibility for the terrorization of the population of  Donetsk and Lugansk oblasts by ultranationalist pro-Ukrainian organizations “Right Sector" and ”Svoboda” to the Ukrainian government.

5. Prepare and present before 09:00 15.05.14 to the staff plans for the departure of forces for the Russian Ukrainian border [my itals]. The departure will be prepared and guaranteed by the special services of the .

Signed by the Coordinator of forces of self defense of the .
I.I. Strelkov (Strelok)

The Strelkov document was  published on the internet by Press Ukraini. It is going viral on the Russian-language internet.

If authentic, Strelkov’s May 12 order points to a collapse of law and order in the Slavyansk region, low levels of public support for the self-proclaimed separatist leadership, an unwillingness to join self-defense forces, and an admission that locals are being supplied alcohol and narcotics to encourage anti-Ukraine activism. Indeed, Ukrainian forces have reported drunken oppositionists, and mobs of demonstrators appear either drunk or high.

Point 3 of Strelkov’s order is either garbled or an instance of unexpected candor. It orders that torture or demonstrative (pokazatel’ny) punishment of pro-Ukrainians, armed or otherwise, must be cleared with the Russian (Rossiisky) mass media (SMI). Point 3, therefore suggests coordination between the pro-Russian leadership and ’s media to insure either proper staging of news, to prevent unwanted images of Russian abuses from being captured by the wrong cameras, and to lay responsibility for acts of terror at the feet of pro-Ukrainian extremists.

The Strelkov document is consistent with the growing consensus that Putin is abandoning his campaign to take over significant parts of east .

The game appears to be over. I would not be surprised if Putin uses Strelkov and his unsavory gang as scapegoats, claiming they were out of his control all the time. 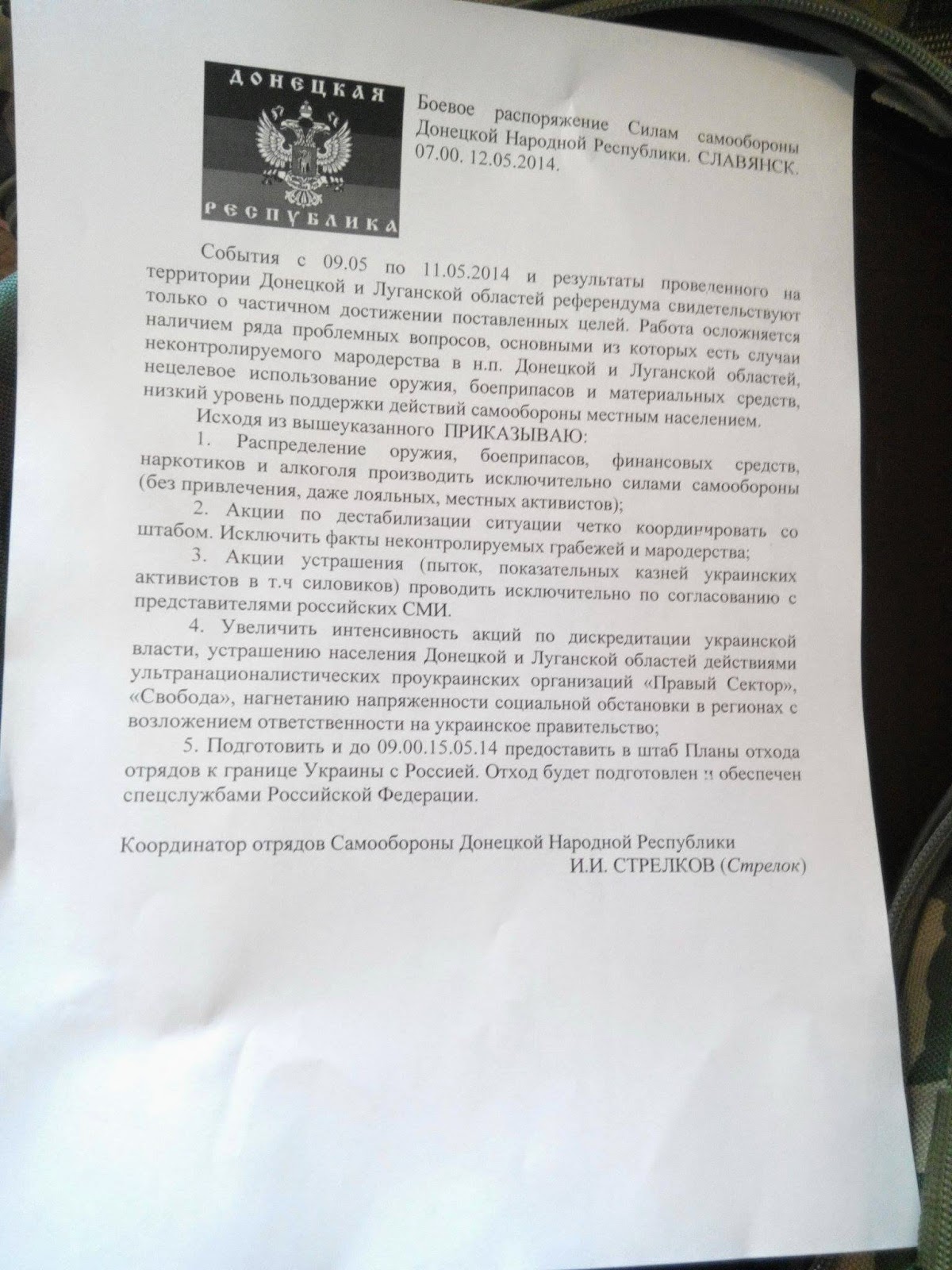